Hakainde Hichilema (born 4 June 1962) is a Zambian businessman and politician who is the current president of Zambia. 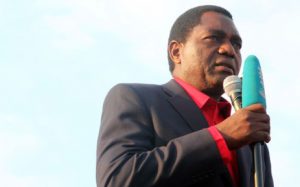 Hichilema is married to Mutinta and they have three children together.

Hichilema is a member of the liberal United Party for National Development (UPND). He was elected as the party’s new President after Anderson Mazoka died in 2006. He was also the leader of the United Democratic Alliance (UDA), a coalition of three political parties in opposition.

Hichilema competed against incumbent president Levy Mwanawasa of the Movement for Multiparty Democracy and Patriotic Front candidate Michael Sata in the 2006 election as the UDA’s candidate.

Kenneth Kaunda, the previous President of Zambia, endorsed him. The election took place on September 28, 2006, and Hichilema came in third place with around 25% of the vote.

In the January 2015 election, he was one of two prominent contenders, losing by a small margin of 27,757 votes to the ruling party’s nominee, Edgar Lungu. He called the election a farce and asked his followers to keep their cool. In the August 2016 presidential election, he ran against Lungu again and lost by a razor-thin margin.

He was detained in April 2017 on allegations of treason and attempted subversion of the government. He was sentenced to four months in prison before receiving a nolle prosequi.

In the election on August 12, 2021, he ran for President for the sixth time. In the early hours of August 16, returing officer Esau Chulu announced that he had won the election.