We have gathered a list of the 10 highest paid African footballers as we want to know exactly which footballers are sitting at the top of the hill.

Football is one of the most popular and most celebrated sports in the world, with research showing that over half of the world’s population (3.572 billion people) tuned in to watch the 2018 World Cup.

Africa is one of the largest markets for football, with football undoubtedly being the most popular sport on the continent.

Naturally, this translates to a healthy pay for soccer players who draw in the market, which is why our footballers are some of the highest-paid athletes on the entire continent.

The captain of the Ghanaian team. Asamoah became the highest paid African footballer a week after he joined a Chinese club on a two year deal with Shangai SPIG.

The footballer who wears the number 10 earns 300,000 pounds per week, making him the highest paid African footballer.

The Liverpool and Egypt forward has been one of the best players worldwide in recent times.

Following a stellar first season with Liverpool where he scored 43 goals for the reds, making him the first African to score 30 Premier League goals, he extended his contract where he would earn £250,000 a week.

The striker has played in the EPL, though he began his career in Norway. He earns 180,000 pounds weekly.

After five remarkable years with Borussia Dortmund, Pierre Aubameyang left them for Arsenal and signed a 3-year contract, where the Ghanaian footballer earns 180,000 pounds weekly.

Being one of the most decorated African players have won the award of highest goal scorer in the European Premier League, Mane has seen top clubs on his heels, looking for his services. He earns a salary of 150,000 pounds per week.

John Obi Mikel is no stranger to lists of highest-paid African footballers.

Following his 10 remarkable years with Chelsea, he joined Chinese club Tianjin TEDA in 2017 and later moved to Middlesbrough before signing with Turkish side Trabzonspor last year.

He is the highest-paid Nigerian footballer in Turkey and earns 140,000 pounds weekly.

The Crystal Palace forward was born in Ivory Coast but grew up in England. He has been representing Ivory coast since 2017 after switching allegiances.

Zaha has been an important player for Crystal palace since returning to the club from Man united and recently signed a new long term contract. He earns 130,000 pounds weekly.

Iheanacho is one of the richest Nigerian footballers, who play for Leicester City. He moved from Manchester City and plays forward from his club, though he has scored lower than he did at Man City.

The Algeria international plays in Turkish super league for Fenerbahce where he is on loan from Leicester City. He currently earns £80,000 a week.

So there you have it. The 10 highest paid African footballers. 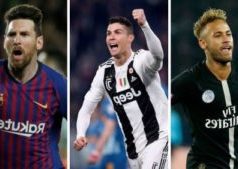 Top 10 Richest NBA Players in the World & Net Worth...