Justin Strydom is a South African actor, producer, writer and voice artist known for his role as Captain Leon Cutts on the M-Net television drama series Snitch, from 2004-2007. 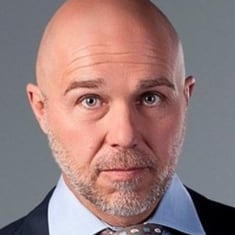 Justin Strydom is the dean of the theater department at the AFDA School for Motion Picture and studied acting at the Pretoria Technikon.

He served in the army as a lieutenant, specializing in anti-tank and small arms weapons. Latin and ballroom dance, horseback riding, motorcycles, quad bikes, boxing, Shotokan (unarmed defense), military special weapons, MC, and onscreen instructor are among his exceptional skills.

Innocent Times, an M-Net Original Productions mini-series that he co-wrote, produced, and starred in in 2008, was renowned for its significant use of special effects, including green screening and CGI.

With Geoff Newton and Sibusiso Mambo, he co-owns the production firm Shooting the Moon, which produced Innocent Times.

In 2010, he portrayed Stan in the SABC2 drama series The Mating Game. In 2013, he also participated in the SABC3 drama series High Rollers as Paul King, an ex-con who vows to clean up his life with the help of his newfound religious faith.