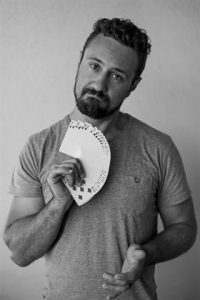 He was born on the 9th of October 1981 in the coastal village of Gansbaai in the Western Cape. As of 2021, he is 40 years old and celebrates his birthday on October 9th every year.

He matriculated from Horskool Overberg in Caledon before spending two years in London, where he mostly worked as a self-taught magician.

He returned home to study drama at the University of Stellenbosch, where he received an honours degree in 2006.

Geon Nel debuted on television in 2012, first as a cop in an episode of the SABC2 sitcom Stokvel and later as Kobus in the second season of the SABC1 drama series Montana.

He then earned the recurring part of Willem in the kykNET drama series Vallei van Sluiers (Valley of Veils), which he first broadcast on May 6, 2014, in Season 3, Episode 4.

For the fourth and final season, which aired on kyKNET later that year, he was promoted to starring cast, his first starring role on television.

From 2016 to 2021, he had another recurring role, this time as Ferryman Charon in the kykNET drama series Die Boekklub (The Book Club), in which he appeared in all seasons.