Christopher van der Westhuizen (born 5 October 1998) is a South African actor known for his role as Emile in the SABC2 soapie 7de Laan. 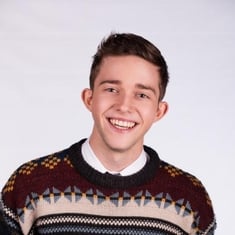 On December 27, 2018, Christopher made his television acting debut as Emile in the SABC2 soapie 7de Laan.

He then earned the recurring character of Magnus in the kykNET serial opera Binnelanders, debuting in Season 14, Episode 248. In Season 15, he returned to the role.