Andre Lotter (born 6 February 1984) is a South African actor known for his starring role as Rickus on the SABC2 soapie 7de Laan. 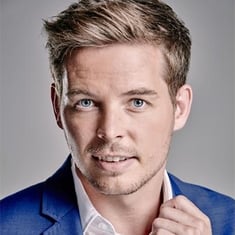 He was born on the 6th of February 1984 in South Africa. As of 2022 he is 38 years old and celebrates his birthday on February 6th every year.

After graduating from Johannesburg’s Horskool Goudrif in 2002, he went on to Tshwane University of Technology to pursue a Bachelor’s degree in Drama from 2006 to 2008.

His first television job was as a photojournalist named Jacques in the SABC2 soap opera 7de Laan, which he performed from 2005 to 2010. He would return to the show six years later in a new capacity.

In 2012, Andre Lotter appeared as a dancer in an episode of the kykNET sitcom Parys Parys (Season 1, Episode 12).

The following year, he got the recurring part of Lukas in the kykNET soap Binnelanders, which had temporarily changed its name to Binneland at the time.

In 2014, he was cast as Liam le Roux in a recurring role on another kykNET drama, Villa Rosa, for which he earned the award for “Outstanding Male Villain” at the second Royalty Soapie Awards in 2015.

He got another recurring part in 2014, this time on the musical youth drama series Sterlopers, which aired on kykNET as well. In 2016, he returned for a second season.

He had a guest leading role in an episode of Mzansi Magic’s serial The Road the following year, and a cameo appearance on the SABC2 sitcom Abo Mzala in 2016.

In the same year, he returned to 7de Laan as Rickus Welman, Chris (David Rees) and Mariaan (Deirdre Wolhuteroldest )’s son, making his first appearance in the role in June 2016. He was later promoted to the lead role.

Later same year, he starred in the made-for-TV film Eintlik Nogal Baie, which premiered on August 24, 2016 at the Silwerskermfees.

How to Unlock NSFAS User Profile