Karen Dudley (born 5 January 1968) is a South African chef, food writer and restaurateur known for her restaurant, The Kitchen in Woodstock, Cape Town. 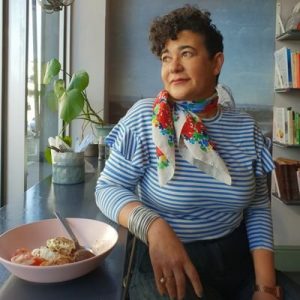 She was born on the 5th of January 1968 in Cape Town, South Africa. As of 2022, she is 54 years old and celebrates her birthday on January 5th every year.

After her catering company outgrew her house, Dudley opened The Kitchen in April 2009. The restaurant is known for its vegetable-centric cuisine, salads, and the Love Sandwich. After the COVID-19 lockdown and its impact on South Africa, the restaurant was permanently closed in May 2020.

Karen has been interviewed by The New York Times and The Guardian and has appeared on CNN and TEDx. She has been as a guest judge on the South African reality cooking show My Kitchen Rules and is frequently discussed on national television.

She has an estimated net worth of $500,000 which she has earned as a chef, food writer and restaurateur.