Khumbudzo Ntshavheni (born 30 January 1977)  is a South African politician who currently serves as the Minister of Communications and Digital Technologies.

Ntshavheni is a member of the National Assembly of South Africa and has previously served as Tourism Manager at the Trade and Investment Limpopo. 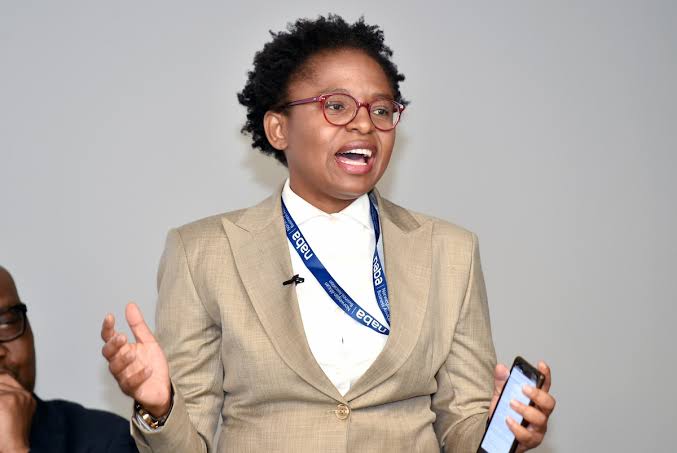 She was born on 30 January 1977 in Sibasa, Transvaal Province. Ntshavheni is 45 years old as of 2022 and celebrates her birthday on January 30th every year.

She matriculated at Mbilwi Secondary School and obtained an MBA degree from Bradford University in the United Kingdom in 2008. She also holds a BA Hons degree in Development Studies and a BA Hon degree in Labour Relations, both degrees achieved from the Rand Afrikaans University.

She started as a junior lecturer at the University of South Africa (UNISA) then proceeded to become the first spokesperson of a Premier Ramatlhodi.

She then became the Manager for Tourism Investment for Limpopo. Ntshavheni served as the Municipal Manager of the Ba-Phalaborwa Local Municipality in Limpopo from 2008 to 2010. She previously served as Chief Information Officer for the Limpopo Provincial Department of Local Government and Housing, and Spokesperson for the Premier of Limpopo.

She was also Chief Operating Officer at the State Information Technology Agency (SITA). In July 2015, she was appointed to the Board of Denel by Public Enterprises Minister Lynne Brown, in the role of non-executive director.

Ntshavheni is a member of the African National Congress Youth League’s National Executive Committee (NEC). She is an active participant in many structures related to the interests of youths and the community. During April 2013, Ntshavheni was one of 22 persons appointed to an ANC National Task Team, tasked with rebuilding the ANC Youth League (ANCYL) structures from branch, regional and provincial levels.[8]

Following her election to the National Assembly in May 2019, President Cyril Ramaphosa appointed her to the post of Minister of Small Business Development. After the death of the Minister in the Presidency: Planning, Monitoring and Evaluation, Jackson Mthembu, in January 2021, Ntshavheni was appointed as his acting successor.

Ntshavheni has an estimated net worth of $500 000 which she has earned from her career.