Marc Lottering (born 4 December 1967) is a South African stand-up comedian from Cape Town, South Africa, and grew up in the Retreat townships of the Cape Flats. 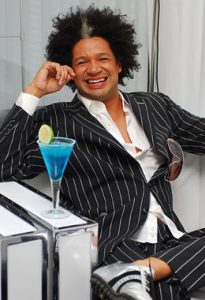 He was born on the 4th of December 1967 in Cape Town, South Africa. As of 2021, he is 54 years old and celebrates his birthday on December 4th every year.

He won the Vita Award for Best Actor in a Comedy in 2001, and he has also won numerous Fleur du Cap Awards.

He performed in the Royal Albert Hall in 2010 as part of the Bafunny Bafunny event.

In 2010, he married Anwar McKay, his ten-year companion.

In 2017, he produced “Aunty Merle the Musical,” a full-ensemble musical with original music that ran for three sold-out seasons in Cape Town and launched to positive reviews in Johannesburg in 2019.

In 2019, he wrote “Not A Musical,” a new stand-up performance that will run in Joburg from May 27 to June 9 before travelling to Cape Town.

He has an estimated net worth of $500,000 which he has earned as a stand-up comedian.