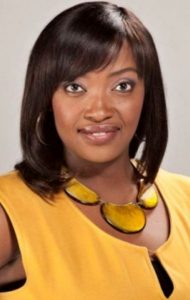 She was born on the 21st of April 1975 in Katlehong, Ekurhuleni Gauteng, South Africa. As of 2022, she is 47 years old and celebrates her birthday on April 21st every year.

She began her career as a sports presenter on the former TV1 station Junior TopSport and the former SABC satellite channel Astra Sat.

She then moved into live television with Tshisimani, a one-and-a-half-hour interactive show featuring interviews with educators, students, inventors, and government officials.

Take 5, her next initiative, was a similar, more concentrated broadcast that featured a live conversation show with a studio audience and viewer calls.

She has hosted several television shows, including Beyond on 3 and Getting PC. She has also worked as a producer on TV shows such as Morning Live and Motswako, on which she has also served as a host.

Her acting career began in the soap opera Isidingo, where she played Seipati Khumalo, a no-nonsense newspaper editor.

She then went on to play legal eagle Dineo Mbatha in Justice for All 1 and 2 and now presents Kaya Talk, a Current Affairs and Lifestyle Talk Show on Kaya FM 95.9.

She has an estimated net worth of $100,000 which she has earned as an actress, television presenter, radio host, and voiceover artist.