Mona Monyane (born 16 May 1990) is a South African actress and Theatre director that plays the role of Dr Nthabeleng Molapo on SABC2 soapie opera Muvhango.

Her parents were in exile during the struggle against apartheid. Mona grew up in Katlehong, east of Johannesburg, and later moved to Pretoria.

Mona also plays the recurring role of Dr Nthabeleng, who is an obstetrician and gynaecologist and girlfriend to James Motsamai (played by Dingaan Mokebe ka Khumalo).

She attended the University of Pretoria where she studied Drama. She began her acting career in 2012. 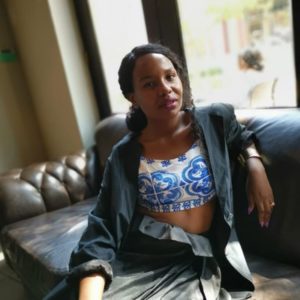 She got married to seasoned actor, Khulu Skenjana. Together, they have two daughters.

Mona Monyane confirmed that she and her husband of four years Khulu Skenjana are splitting up on Twitter. The couple’s relationship has not been a bed of roses as it faced a lot of battles.

The paired has been together for more than five years and share two kids. Mona broke the news on her Twitter page and explained the pair couldn’t continue as a couple.

She has an estimated net worth of $1 million to $5 million which she has earned from her acting.