Bongani Khumalo (born 6 January 1987) is a South African professional footballer who plays as a centre back for SuperSport United and South Africa. 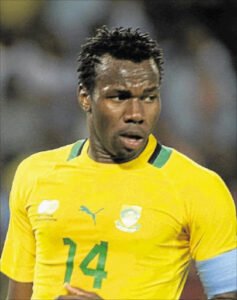 Khumalo was born in Manzini but relocated to Pretoria, South Africa during his infancy. There, his late father was a language lecturer at the University of South Africa and his mother was a teacher.

During his time in Pretoria, Khumalo studied towards a degree at the University of Pretoria while embarking on a professional football career. He later had to put his studies on hold, however, following a move to England.

Upon his arrival in England, Khumalo was reported to have come from an impoverished background and is one of fifteen siblings. He later denied the reports, describing his family as middle class and confirming that he was an only child.

Having graduated from the Arcadia Shepherds academy, Khumalo signed for the University of Pretoria in 2005. He spent two seasons at the club where he played in the National First Division and scored four goals in 50 appearances.

His form during his time in with the University of Pretoria caught the eye of a number of South African Premier Division sides and in 2007 he signed for SuperSport United.

Following his arrival at SuperSport United, Khumalo soon established himself as an important player in Gavin Hunt‘s side and was later named captain of the club.

Over the course of the next three seasons, he helped the club to three consecutive Premier Division and became the youngest ever player to lift the league title, at the age of 23.

Khumalo’s spell with the club coincided with the SuperSport United entering into an affiliation agreement with Premier League club, Tottenham Hotspur, and in 2010 he signed a pre-contract to join the London-based club in January of the following year.

Khumalo was released by Tottenham Hotspur at the end of 2014–15 season,[9] without ever playing a competitive game for the club in 4.5 years.

On 24 March 2011, Khumalo made an emergency deadline day loan move to Championship club Preston North End. He made his debut for Preston on 2 April 2011 in their 2–1 victory over Swansea.

On 25 July 2011, Khumalo moved on a season-long loan to Championship club Reading. However following the arrival of Kaspars Gorkšs from Queens Park Rangers, Khumalo’s appearances were limited, and he did not play a first-team game after August.

On 1 February 2012, it was confirmed that Khumalo’s loan would be terminated early, to allow him to return to Tottenham.

Khumalo was signed by Doncaster Rovers of the Championship for a season’s loan on 31 July 2013. On 6 August in his second game for Rovers, he scored the winner in a 1−0 victory against Rochdale in the League Cup.

On 14 March 2015, Khumalo joined Colchester United on loan for the rest of the season. He made 10 appearances for the Colchester Community Stadium based club before returning to Tottenham.

On 4 August 2015, it was announced that Khumalo had signed for SuperSport United, leaving Tottenham Hotspur after 4 years and 0 competitive appearances.

He made 10 appearances in all competitions for SuperSport before moving to fellow Premier Soccer League side Bidvest Wits.

Khumalo was named in the South African squad for the 2009 Confederations Cup and 2010 FIFA World Cup, both in South Africa.

On 22 June 2010, Khumalo scored the first goal after 21 minutes against France as South Africa finished their World Cup campaign with a 2–1 win. Khumalo was captain of South Africa in the 2013 African Cup of Nations.