Schalk Brits (born 16 May 1981) whose full name is Schalk Burger Brits is a former rugby union player for the South Africa national team and the Bulls in Super Rugby. 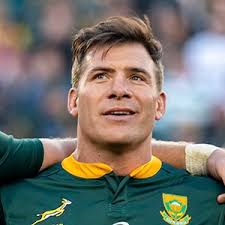 He was born on the 16th of May 1981 in Empangeni, KwaZulu-Natal, South Africa. Schalk Brits is 41 years old as of 2022 and celebrates his birthday on May 16th every year.

He got married to Colinda Wijnants on 29 January 2011 in Greyton, South Africa.

According to networthstats, Brits is estimated to nave a net worth between $100,000 – $1M.

The oldest member of the Springboks’ Rugby World Cup squad, Schalk Brits, has retired from rugby for the second time in two years, but he insists this time it’s the real deal as he reflects on a career that ended on the highest of high notes in Japan.

The 38-year-old Brits was lured out of retirement in 2018 by Rassie Erasmus to join the Springbok squad – after a sparkling career that included 74 Super Rugby caps with the Lions, Stormers, Bulls and more than 200 appearances for English powerhouse Saracens.

Before that, Brits hadn’t represented the Boks since the Rugby World Cup in 2015 and although he played in 15 Tests in an international career spanning 12 seasons, the ever-smiling, hot-stepping hooker retired as a Springbok captain with a RWC winners’ medal around his neck.

“Schalk was an invaluable member of our squad and someone who not only lifted the spirit amongst the players but set an example with his professionalism and superb work-rate throughout the last two seasons,” said Erasmus, South Africa’s Director of Rugby.

“He came in with one goal in mind and that was to make the Springboks successful, putting aside his own ambitions and selflessly working for the greater good of the team, as player and mentor to younger squad members.

“To say Schalk is a team player would be underestimating the massive role he played in our success, and for that, I can only thank him.”

Despite being part of the squad for almost the entire 2018 season, Brits was only used as a replacement in the third Test against England in Cape Town.

He received more game-time in 2019, as a replacement against Australia in Johannesburg, before leading the Springboks against Argentina in Pretoria and Namibia in the City of Toyota. Brits lost only twice in a Bok jersey.

“I was happy and content with my career when I decided to retire at the end of the English season in 2018, and I was on holiday with my family in Ibiza when I got a text message from Rassie Erasmus, but at first I thought it was Vincent Koch playing a joke,” Brits said.

“When I realised it was really Rassie, I decided to give it one last shot and ended up playing for the Bulls, something I never thought would happen as a born and bred Capetonian, but I loved my time in Pretoria and we had a good season as well.

“Playing in Pretoria was tough on my family, but I’ve not regretted it for one day, as it gave me a shot at playing for the Boks again.

“It was a season of sacrifice, but it was worth it. When we saw Rassie’s plan – and everyone bought in – we knew what we could achieve and all of us worked towards that goal.

“Everyone knew their roles and how much hard work it would take, and we got stuck in. As a squad, we spent a lot of time together and it was unbelievable being part of this experience.”

Brits said as the Boks’ season progressed and they won the Rugby Championship, the belief in the squad that they could go all the way, started to grow. He was also very proud to captain the side against Argentina.

“I didn’t expect to be named captain and I was very proud, but it was an easy job with the guys around me,” said Brits.

“The Rugby World Cup in Japan was an amazing experience for all of us – we decided to embrace Japan and make the most of it.”

On his own role in the team, Brits said he saw it a bit different to what most people thought: “I realised later in my career that I only had control over my own performance and not that of other players or team selection.

“So my view was to give it my best shot, but also to push the other hookers in the squad as hard as I could, and if I get selected, great – but it wasn’t the end of the world if I didn’t play and I wasn’t going to upset the apple cart.

“For me, this was about the journey, experiences and making memories, and being part of something special. Winning almost became a by-product of it all, not that we didn’t put in a lot of hard work and effort to be successful.

“Leaving Japan with a gold medal was obviously great, but even if we hadn’t won, I would still have loved going to Japan, being part of an amazing tournament and a wonderful Springbok squad.”