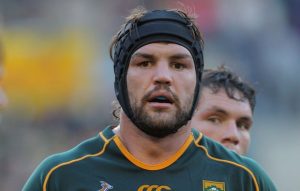 Before joining the Free State Cheetahs from Bloemfontein, Van der Merwe attended Grey College in Bloemfontein. He made his Vodacom Cup debut in the 2006 campaign and started eleven of their matches in the competition as well as appearing as a substitute twice.

Van der Merwe has recently relocated to Pretoria, where he now works for the Blue Bulls. Within his first eleven starts and two substitute appearances in the 2009 Currie Cup Premier Division, he instantly established himself as a first-choice player for them. Prior to getting called up to the South African national team for the first time, he played for the Bulls in the 2010 Super 14 season.

A week before the start of the 2015 Super Rugby season, the Bulls revealed that Van der Merwe was leaving to join French Top 14 club Clermont, with whom he had signed a deal prior to the start of the 2015 Currie Cup Premier Division. Following his contract expiration, he was granted an early release and relocated to Clermont for the Currie Cup.

He has an estimated net worth of $500,000 which he has earned as a rugby union player.