Nik Rabinowitz (born 3 October 1976) is a South African comedian, actor, and author who has made several guest appearances on several comedy shows. 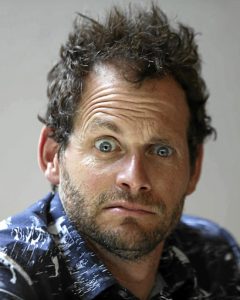 Nik is happily married to Debbie Rabinowitz who is a General Practitioner and together they have 3 children.

He appeared in the 2012 film Material. He currently resides in Cape Town. He is also a presenter on SABC, where he has presented Coca-Cola Megamillions Gameshow.

He currently presents The Week that Wasn’t. His book “South Africa: Long Walk to a Free Ride” was launched in early 2012.

International appearances include Australia, Canada, Holland, the United Kingdom, the USA, and Zimbabwe. He’s been a guest on BBC 2’s Mock the Week, performed at London’s Royal Albert Hall, and intentionally driven on the wrong side of the road in Nigeria.

His major claim to fame remains the fact that he was born in a stable, and is one of only two Jewish boys in the last two thousand years to have done so.

He has an estimated net worth of $200,000 which he has earned as a comedian, actor, and author.