Thomas Oosthuizen (born 2 April 1988) is a South African professional boxer. He is a former IBO world champion in two weight classes, having held the super-middleweight title from 2011 to 2014, and the light-heavyweight title in 2015. 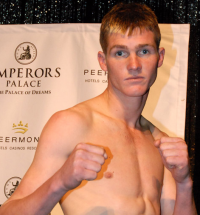 Oosthuizen made his professional debut on 29 February 2008, knocking out Johannes Swart in two rounds. He then reeled off twelve straight victories, nine of which coming by way of knockout.

On 6 November 2010, Oosthuizen faced off against IBO Super Middleweight titleholder Isaac Chilemba. The result was a split-decision draw which allowed Chilemba to retain the title, Oosthuizen claims that attempted to make a rematch were swiftly declined.

On 26 March 2011, Oosthuizen got a second crack at the IBO title against Evert Bravo (Chilemba had vacated the title to move up to the Light Heavyweight class).

Oosthuizen won the fight via a ninth-round technical knockout, which saw the referee stepping in to save Bravo from taking further punishment. Oosthuizen made his American debut on the undercard of Andre Berto vs. Jan Zaveck, winning a unanimous decision over Aaron Pryor Jr on 3 September 2011.

After two seemingly lacklustre performances (a draw with Brandon Gonzáles and a split decision victory over Ezequiel Maderna), a motorcycle injury forced Oosthuizen to withdraw from a scheduled bout fight with Eleider Alvarez.

He was subsequently released by his promoter Rodney Berman, who cited the fact that Oosthuizen was at least 13 pounds over the 175 lb. limit for the bout; stating, “He’s had so many chances and blown every one”.

Following a brief stint in rehabilitation, Oosthuizen was able to mend ties with his promoter in an attempt to move forward with his boxing career. He vacated his IBO Super Middleweight Title on April 21, 2014, and is scheduled to face Frenchman Doudou Ngumbu in Light Heavyweight bout.