Saskay BBNaija (born 1999) whose full name is Tsakute Jonah is a Nigerian artist and is one of the housemates in the Shine Ya Eye season 6 2021. 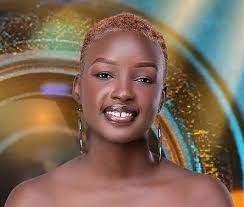 She was born in the year 1999 and her state of origin is Adamawa State.

Saskay is a bookworm and an extrovert. She likes all kinds of music and considers herself to be “an incarnation of art.”

She views a good time in her life to be discovering her talents and skills and using them to impact others and better her persona while attempting to find her place in the world.

Despite being banned from school in 2015, Saskay is thriving as a fine artist, winning awards like _’Model of the Year’ and _’Female Personality of the Year’ at her institution.

She enjoys dancing, cooking, and meditating, and believes that her personality was tailor-made for a reality show like Big Brother Naija.

She has an estimated net worth of $100,000 which she has earned as an artist.