Thabo Malema (born 26 December 1985), is a South African actor best known for the roles in the films and television serials: The No. 1 Ladies’ Detective Agency, Single Guys and Strike Back. 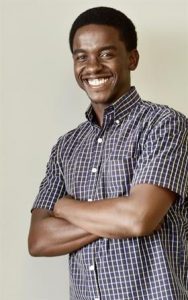 He was born on the 26th of December 1985 in Johannesburg, Gauteng, South Africa. As of 2021, he is 36 years old and celebrates her birthday on December 26th every year.

He began his acting career in 2006, despite having no prior acting experience. Kalushi, a historical film, was his next project. He appeared in theatre productions such as All Balls, Umuzi ka Vusi, and Woza Albert. He is well known for his roles as Vuyo on Agent and Young Selogilwe Namane on Ashes to Ashes.

He also appeared in television shows such as The Lab and Room 9, Single Guys, Gold Diggers, and Lithapo, in addition to cinema and theater. In the meantime, he worked on worldwide Hollywood films like Primeval Kill, 10000 BC, and A Million Colors.