Mpho Osei Tutu (born 31 December 1981) is a South African actor and voice artist best known for his roles in the films and television serials: Seriously Single, Mrs Right Guy, and The Jakes Are Missing. 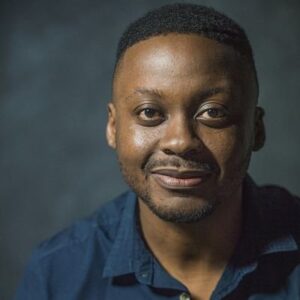 He is happily married to Tumi Morake who is a comedian, actress, TV personality, and writer. Their wedding was on Saturday, 28 November 2009 and they are blessed with 3 children.

He began his acting career in the theatre, appearing in Zakes Mda’s The Mother Of All Eating, Pieter-Dirk Uys’ MacBeki, Paul Slabolepsky’s For Your Ears Only, and The Island, among others.

He also visited the United Kingdom, the United States, and Greece with the latter. Then he made Getting it On, which won the Multi Choice VUKA! Awards for Best Overall Short Cut in 2006.

In 2010, he won an inaugural Standard Bank Ovation Award for his performance in Convincing Carlos, in which he portrayed several characters.

He won the Best Play award at the 2013 Naledi Theatre Awards for his performance as ‘La Fleche’ in Sylvaine Strike’s play The Miser.

Hopeville, which he published in 2010, was nominated for an International Emmy Award. In the meantime, he made a name for himself as a director with films like Zone 14, Ga Re Dumele 4, and Kota Life Crisis.