Kgalema Motlanthe (born 19 July 1949) is a South African politician who served as President of South Africa between 25 September 2008 and 9 May 2009, following the resignation of Thabo Mbeki.

At the 53rd National Conference of the African National Congress, Motlanthe ran for the position of President of the ANC but was soundly defeated by Zuma, who won re-election. He was succeeded as Deputy President of South Africa by Cyril Ramaphosa in 2014.

Motlanthe, who had maintained a low public profile, was elected in 2008 to the presidency of South Africa by the South African National Assembly following the resignation of Mbeki, and he was widely considered to be acting as a “caretaker president” on behalf of Zuma.

Zuma succeeded Motlanthe on 9 May 2009 in a presidential election held by the South African National Assembly, following the 2009 general election which had been won by the ANC.

Motlanthe had been a student activist, trade unionist and member of the ANC’s military wing, Umkhonto we Sizwe, during the struggle against apartheid.

Motlanthe, a left-leaning intellectual, is seen as a highly-skilled political operator within the politics of South Africa, and a key figure behind the success of Zuma. Motlanthe was South Africa’s first Sotho-Tswana-speaking president. 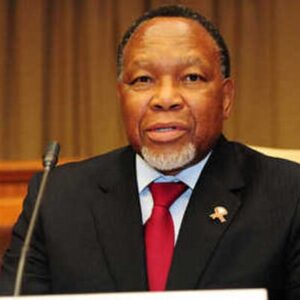 He grew up in Alexandra, Johannesburg, Transvaal (now Gauteng). His parents, Louis Mathakoe Motlanthe, a cleaner, and Masefako Sophia Madingoane (d. 2014), a domestic worker, married in 1946.

Motlanthe’s maternal grandfather, Kgalema Marcus Madingoane and his grandmother, Louisa Mmope Sehole lived in Apex, a squatter camp in Benoni East Rand Old Location where they moved to in search of work.

Here, Madingoane became involved in community affairs and eventually became a Councillor in Apex. He was instrumental in founding the township of Daveyton in 1955 where he ran a funeral parlour and a general dealership.

When he was 11, his parents were forced to move from Alexandra to Meadowlands. He first attended school in Ga-Mothiba in the northern Transvaal (now Limpopo Province).

Motlanthe returned to Alexandra and enrolled in Grade 1 at an Anglican Missionary School. The school was eventually closed when the administration refused to implement Bantu Education.

Then, he attended the Totomeng Lower primary School in Meadowlands and then went to Meadowlands Secondary School, walking several kilometres to and from school.

Motlanthe’s parents were practising Christians, which influenced his outlook on life. He served as an altar boy and at one point intended to enter the Anglican priesthood. Family and friends described him as a gentle and kind person.

In 1964, the Anglican Church awarded him a bursary to attend St Christopher’s in Swaziland to complete his secondary schooling and then enter the priesthood.

His application for travel documents to the Bantu Affairs Department was turned down, and he was informed that he had to study in South Africa. He then enrolled at Orlando High School in Orlando, Soweto.

His political interest was aroused after reading a book by Anglican priest Trevor Huddleston, Naught for Your Comfort. The Black Panther Movement in the United States and the rising Black Consciousness Movement in South Africa also played a role in shaping his political awareness.

Whilst at high school, he worked part-time at a bottle store in Hyde Park, Johannesburg. In 1969, he began work in the Johannesburg City Council, supervising liquor outlets in Soweto.

Together they later joined the ANC’s military wing Umkhonto we Sizwe (MK). During the seven years that he worked there, Motlanthe was able to engage in underground work such as going almost weekly to Manzini, Swaziland couriering ANC recruits for military training.

He attended the Anglican Missionary school now known as Pholoso Primary and matriculated from Orlando High School in Orlando, Soweto after his family was forcibly removed there in 1959. The formative influence in his early years was the Anglican Church. He served as an altar boy for many years and at one point thought of becoming a priest.

On 25 September 2008, Motlanthe was elected by Parliament as the third post-apartheid President of South Africa. Chief Justice Pius Langa announced Motlanthe’s election after a secret parliamentary ballot contested between Motlanthe and Joe Seremane from the opposition Democratic Alliance. In the ballot, Motlanthe gained 269 votes from the 351 cast.

Although he has been criticised for standing by Mbeki’s “soft and non-confrontational” approach towards the Zimbabwean crisis, he was quite critical of Robert Mugabe’s Zimbabwe African National Union-Patriotic Front and Morgan Tsvangirai’s Movement for Democratic Change.

Furthermore, his criticisms of emerging black capitalists and that Black Economic Empowerment was that it should be “restricted to one deal [per individual] and that what was needed was a genuine economic transformation that benefitted the Black masses rather than creating an elite club of Black millionaires” has earned him the “resentment of budding Black capitalists.”

Over HIV/AIDS, Motlanthe is accused of regurgitating Mbeki’s now widely-discredited denialism. However, he changed his stance on ARVs following the government’s decision of a mass rollout programme.

Motlanthe has expressed his desire to address AIDS in South Africa using conventional scientific approaches. He appointed Barbara Hogan to replace Mbeki’s health minister Manto Tshabalala-Msimang, who had denounced anti-retroviral drugs as poisons and advised the use of olive oil, garlic, and beetroot by HIV-positive persons.

In early March 1998, Kgalema Motlanthe led the ANC’s charge against the Medicines Control Council for refusing to allow the testing of Virodene on human subjects. He suggested that the MCC was acting under the sway of rival pharmaceutical manufacturers saying “I surmise that the council is driven by other interests than concern for proper control of medicines”.

Motlanthe caused some controversy in South Africa when he did not reinstate the Head of the National Prosecuting Authority (NPA), Vusi Pikoli in December 2008. Pikoli, the head of the NPA, was suspended by Mbeki in 2007.

Just prior to this Pikoli obtained an arrest warrant for the Commissioner of Police and head of Interpol, Jackie Selebi. The media speculated that Mbeki tried to shield Selebi. As President, Motlanthe recommended to Parliament that Pikoli be fired even though the [Frene] Ginwala Commission of Inquiry advised otherwise. Motlanthe was widely criticised for his action by the Parliamentary Opposition and the media. He strongly denied that he succumbed to political pressure from the ANC.

Motlanthe gave his first and only State of the Nation Address on 6 February 2009.

In 1975, he married Mapula Mokate, from Sophiatown. She was a radiographer who used to work at Leratong Hospital in Mogale City and Baragwanath Hospital in Soweto. They are divorced. The couple has three children, Kagiso, Kgomotso and Ntabiseng.

They were separated before he became President of South Africa. He exchanged gifts with businesswoman Gugu Mtshali in March 2014 in preparation for a Gauteng wedding. He will[when?] reportedly move into a “Bali-style” rented mansion in Houghton, Gauteng. Motlanthe married Mtshali in May 2014. The wedding was attended by 300 guests including President Zuma.