Sylvia Lucas (born 22 April 1964) is the current Deputy Chairperson of the National Council of Provinces in the Republic of South Africa, after having taken office on 23 May 2019. 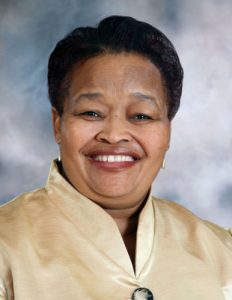 Lucas joined the ANC in 1992 after working as a typist for the National Party. In 1992, Sylvia Lucas joined the African National Congress (ANC) as a member of the ordinary branch. Lucas was a councillor for the /Khara Hais Local Municipality in Upington from 1995 to 2000, while also participating in ANC regional institutions in the area. From 2001 until 2004, she was the first female chairwoman of the ANC in the Siyanda region.

Following South Africa’s general election on 7 May 2014, the National Executive Committee of the African National Congress re-appointed Lucas as prime minister on 20 May 2014. In the eight ANC-run provinces, she was the only woman to be appointed as a premier.

Lucas resigned in May 2019 to join the National Council of Provinces as Deputy Chairperson. Her replacement has been named Zamani Saul.