Akothee (born 8 April 1980) whose real name is Esther Akoth is a Kenyan Musician and businesswoman. She is the founder of Akothee Safaris (a tour company based in Kenya), Akothee Foundation, Aknotela and Akothee Homes, a real estate business. 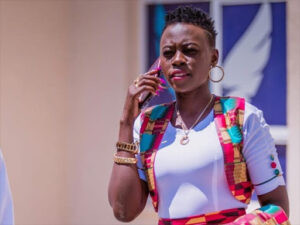 Akothee was born Esther Akoth on 8 April 1980 in Migori County as the first daughter of her parents. She grew up in Migori, where she attended school. Akothee attended Nyabisawa Girls secondary school but dropped out one year later in form two (sophomore) before completing her high school program when she eloped with her boyfriend who was also in high school at the time and entered early marriage.

After running away from home, her boyfriend went back to school and she was forced to start with her mother in law, for whom she worked as a house help for seven years.

It was while at her mother-in-law’s home in Migori that she conceived and bore her first child. She was fourteen years old at the time. She gave birth to her second and third children at ages fifteen and sixteen respectively.

However her second child, a daughter, died in infancy following an illness because she could not raise the money needed for her treatment. In 2000, she gave birth to her fourth child, at seventeen years of age. The same year, Akothee and her mother-in-law disagreed, and she left her in-law’s home to fend for herself.

As result of their disagreement, Akothee moved to Kanga, where she worked as a fish hawker to raise money for upkeep. Meanwhile, her husband continued with his studies, and by this time, he was in the university.

In 2003, he completed his university education and the two moved in together, at which point se resumed her high school studies at Gachie Mixed Secondary School while her husband took care of the kids.

In 2004, at 21 years of age, Akothee graduated from high school with a mean grade of C+. According to her result-slip, which she posted on social media, Akothee scored A in History and Government, D- in Mathematics. During this time, her husband had landed a job in Nairobi and moved there.

Akothee is a mother of five children

Akothee has released several successful songs. They include

Early March 2020, Akothee released Mwitu asa, a song written and sang in the Kamba language. Since Akothee is not a native speaker of the Kamba language, this was considered intriguing and popular among her fans; especially those from the Kamba ethnic group.

Akothee is one of the most popular music artists in Kenya. With more than one million followers, her Instagram account is currently the eleventh most followed among East African celebrities, behind Lupita Nyong’o, Diamond Platinums, Ali Kiba, and others.

She has an estimated net worth of $300,000 which she has earned as a musician.