The park was designed at a cost of ZAR 700 million and was financed by the eThekwini Municipality for a total of ZAR 450 million. 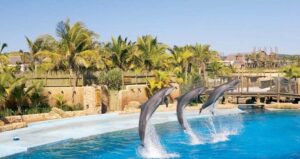