Akustika Chamber Singers is a chamber choir from South Africa, consisting of 36 young adults, and is based in the capital, Pretoria. 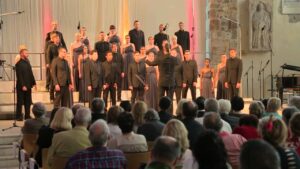 Akustika was established in December 2005 by its current conductor Christo Burger. The choir strives towards the highest level of music production and contributes to the choral community of South Africa through by combining visual arts and choral music.

The conductor and choir members are all alumni of various South African university and youth choirs. All choir members are subjected to a strict audition process in order to maintain the high standards required for honest music making.

Cost Per Unit of Electricity in Cape Town

The Akustika Chamber Singers’ repertoire include a wide range of musical styles from Renaissance works through 20th and 21st century composed music, African traditional as well as improvisational repertoire.

Akustika Chamber Singers competed in the 2008 International Eisteddfod in Llangollen, Wales. The choir won the Mixed Choirs competition which enabled them to compete in the Choir of the World competition, which they also won.

In 2010, Akustika Chamber Singers competed in the Concorso Corale Internazionale 2010 competition, in Riva del Garda Italy, where they were the A1 Category Winners, as well as the Grande Premio (overall) winners with an unprecedented 98.7%. Akustika also received a special prize from the jury for the outstanding performance of the work “Karimatanu Kuicha” by Ko Matsushita.

At the 2018 World Choir Games in Tshwane Akustika Chamber Singers won the category C15, Musica Sacra a Capella, with a score of 91.75 points. The choir also won 3 other gold medals at the event.