Alex Bapela (born 4 October 1969) is a South African retired footballer who played at both professional and international levels as a midfielder.

Bapela played club football for Real Rovers and Mamelodi Sundowns; he also earned six caps for the South African national side between 1999 and 2000. 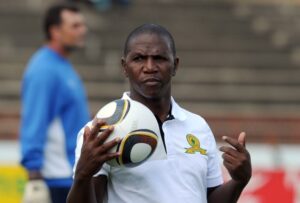 He has an estimated net worth of $200,000 which he has earned as a professional footballer