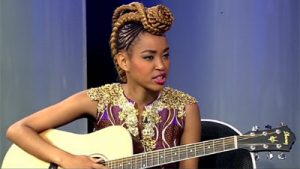 Her family moved to New Zealand in early 2012, and she later moved to South Africa to pursue her tertiary education at Walter Sisulu University in the Eastern Cape.

After returning to South Africa to pursue a Bachelor of Commerce degree at Nelson Mandela Metropolitan University|NMU, she graduated. On the other hand, she began her musical career while still in school.

She is married to controversial and outspoken artist manager Ntlamulo ‘Nota’ Baloyi also known as The Authority.

The couple got married last year during the hard lockdown and during one of Berita’s interviews, she mentioned that they would have a big wedding once things get back to normal.

She sang in the choir at their local church in Zhombe when she was younger, and her passion for music blossomed after she learned to play the piano.

At the age of 18, she wrote a few songs and purchased a guitar for herself. Her parents were opposed to her immediate commitment to music and wanted to send her back to Zimbabwe to study.

She released her first album, Conquering Spirit, in 2013, and it went gold after selling 15,000 copies and peaking at No. 1 on iTunes a few weeks later.

She has other albums, including one with her most recent hit, listed below, in addition to her debut album, Conquering Spirit, which catapulted her to fame.

She has an estimated net worth of $100,000 which she has earned as a musician.