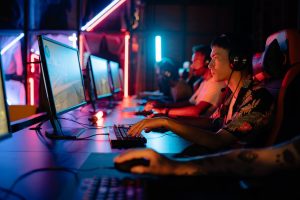 The eSports industry has suffered mixed fortunes over the last couple of years. Although the number of South Africans engaging in and watching eSports has grown significantly, the upheaval caused by the coronavirus pandemic meant that many tournaments and events had to be put on hiatus in 2020 and 2021.

However, more than a third of the country’s 60-million population have now received at least one dose of a viable vaccine, fuelling optimism that a corner is finally being turned on the issue. With that in mind, can we expect to see the return of in-person eSports tournaments and LAN events in 2022? Although very little has been confirmed as yet, here are some of the biggest dates in the eSports calendar for the upcoming year.

2021 saw the first ever continental eSports tournament take place in Africa, with participants from 16 countries duking it out to become the best in their chosen discipline.

The inaugural tournament saw four games feature, with PES 2021 Mobile, FIFA21, Call of Duty: Mobile and PUBG Mobile the titles available to entrants. South Africa contributed 9% of all registrants and although the country didn’t walk away with any of the prizes this time around, it will hope to rectify that wrong in 2022.

Details of the second iteration of the competition have yet to be released – but given the success and popularity of this year’s Series, it’s only a matter of time before a date is set for qualifying to begin all over again.

Comic Con Africa is the continent’s largest gaming and geek event and anyone who follows the latest eSports news will know that it involves far more than just cosplay and exhibition stalls.

Indeed, VS Gaming are responsible for hosting one of South Africa’s largest gaming events at Comic Con and although the extravaganza was postponed in 2021, it promises to be back bigger and better than ever next year.

A provisional date of the 22nd to the 25th September has already been set, with the Johannesburg Expo Centre the likely venue for the tournament.

Another of the eSports calendar’s biggest events, rAge Expo was unable to take place in person in 2020, with its organisers hosting an online edition for its 18th birthday. They also decided to forego any sort of tournament this year, instead waiting for the 20th anniversary of the event in 2022 to put on a physical gaming wonderland for attendees.

One small fly in the ointment is the fact that the TicketPro Dome in Johannesburg has been sold to be converted into a car dealership showroom, so rAge will have to find a new home in 2022. However, with plenty of time to plan its comeback, that shouldn’t represent an insurmountable obstacle.

Given that Africa hasn’t inoculated as much of its population as some other parts of the globe, there is still a substantial degree of uncertainty surrounding in-person events. That could potentially affect the eSports industry, but the three named events are the biggest ones to look out for in 2022 if all goes to plan with the vaccination drive.