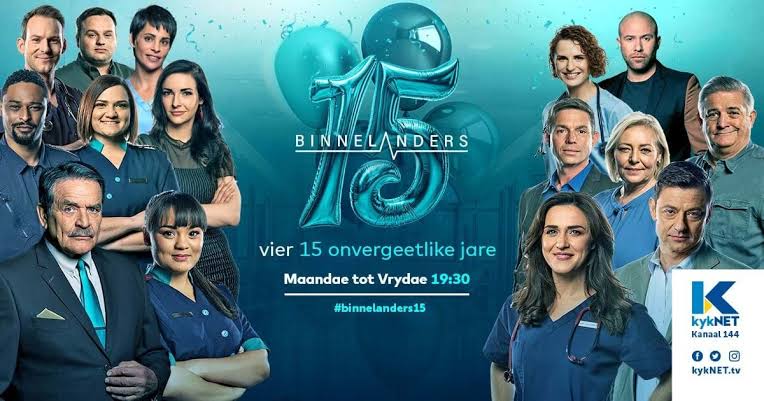 Mike is concerned about what Elise knows – and therefore makes a plan. Tertius receives bad news from Bloemfontein, while Koos wants to see the best lawyer in Pretoria. Okkie fears he might be missing out when he hears about Louis’s invite, and a patient’s symptoms worry Julia and Hugo.

Rian’s lead needs to be investigated further. Havoc ensues after a newspaper article, and Tertius states his conditions to help Koos. Mike gets suspicious after his meeting with Elise, while Uys’s sliver of information puts a doctor’s head in overdrive. Louis tries to influence Wimpie, and Annelize tries to bypass a hot topic.

Naomi is probably not the only one completely in love with Louis now – while Wimpie is not totally happy with where the spotlight falls. A confession doesn’t lead to the happiest of awakenings. Mike’s accusations are probably not unfounded, and Tertius realises he will have to have a serious discussion with Koos.

The unpredictability of life becomes the subject of a discussion, and Rian talks to Tertius about matters of the heart. Okkie realises why Wimpie is so stubborn, while Mike makes a decision regarding the neurostimulator. Lydia is a foe to be reckoned with, and Elise may have the keys to success in her hands.

Gaby doesn’t take Koos’s setback too well, while the whole Tonik is caught off guard amusingly. Julia’s words hits a patient hard, and Mike is ready to go to war. Rian’s honesty has far reaching consequences, while Annetjie has to face the consequences of her actions.

Delia is full of surprises – and also gives more than one person the shock of their lives. Koos is not impressed with the information he hears, while Tertius is upset by a message he receives from Lydia.

Okkie and Louis will have to talk to Wimpie about his behaviour of the previous night, and Uys shares a bit of good news. Naomi has seen something that makes her a little unhappy, while Conrad has a big question to ask…

Okkie will have to restrain himself when it comes to Wimpie’s ideas, and Tertius is frustrated with the position he is placed in. Conrad’s news doesn’t’ throw Tracy as much as a visitor’s attitude.

The future looks bright for Brandon Samuels, while more than one woman offers Tertius support. Patience is not in the notes for the trio, and Delia is concerned about her blood pressure. A signature complicates an already intricate situation, and Tracy is caught off guard by an honest discussion.

The bride is not impressed by the trio – and it becomes clear that the white flag was raised prematurely. Gaby has more than one secret plan to execute, while Delia’s announcement causes feelings of guilt for Conrad. Chanel is not impressed with her father.

Gaby tries to sort out the mess she created, while Chanel shares news regarding her father with Danny. Tracy’s visit to Delia leaves her with more questions than answers, and to broker peace is a incomprehensible process for many.

Delia blames Tertius for the fact that Tracy knows about her secret, and Gaby needs Okkie’s help. Steve is determined to make his new life work out, while Tertius needs to amend his will. The sums are not adding up for Tracy, and Lexi’s plans for the future comes to light.

Annelize is concerned about Koos’s symptoms. Tertius does his best to vanquish Tracy’s fears, but Conrad doesn’t help the situation. A ring is a reason to rejoice. Karen makes a shocking discovery, while Steve does his best to go on with life.

Koos makes Tertius aware of an upsetting document in his personal folder, while Conrad decides to confront Delia. The board is caught off guard by Steve’s announcement, and the tension between two lovers is noticeable.

Tracy decides to grab the bull by the horns and to have a very uncomfortable, but necessary, conversation. Tertius tells Gaby everything about their father.

Conrad and At makes Brandon an offer, while Steve tries to lighten his workload. Karen tells Annelize the truth about Gaby, and Tracy takes note of Steve asking the Ferreira’s a huge favor. Vicky has a school project that needs a lot of attention, and the person behind Delia’s mysterious calls is revealed.

Wendy words her concerns towards Tertius, and Brandon comes to a decision regarding Binneland’s offer. Gaby can’t handle the reality of  Koos’s situation, while Conrad realises how much Steve has on his plate.

Conrad asks Piet to help getting to the bottom of things where Delia is concerned, and Tertius makes a very difficult promise.

Delia and Tertius friendship deepens, and Steve makes a decision about the adoption. Tracy’s suspicions are strengthened, while Wendy knows what she wants in life. Tertius realises that he has a weird family, and a surprise – and an embarassment! – awaits Steve at home.

The Ferreira’s new neighbours are extremely noisy, and Delia discusses sensitive information with Tertius. Vicky makes a new ‘friend’, while Conrad is surprised when At reprimands him about Tracy.  Ilse and Naomi meet Rex van der Linde, while Janneke tries to reach out to Steve.

Concern about Ruan mounts, while a fiery Okkie would like to go meet the new neighbours. Delia has to deal with more than one storm, while Conrad and Annelize aren’t going to be easily convinced regarding a business decision.

Wayne and Rex are definitely up to something, and a investor might come in handy in a corporative game of chess.

Shares makes someone livid, and Okkie has more than one problem to deal with. Steve confronts Conrad about Tracy, while Rex makes Chanel uncomfortable. Delia is not afraid to raise her voice, and Naomi voices her concerns towards Ilse.

Rex is still up to no good – and this forces the neighbours to jump into action. Delia plays her trump card – and opens up towards Tertius regarding her professional wheelings and dealings. Ilse needs to appoint a new waitress, while trouble is brewing in Steve’s abode. A bomb bursts in the Koster Mansion.

Trouble with the neighbours evolves into a small war. A very upset At asks Piet to solve a puzzle, and the newest presentation is discussed. Tertius gets angry with Annelize, while Janneke’s intentions are questioned. The idea of a counsellor doesn’t go down well, and Delia has to face more than one Koster.