Bonginkosi Khanyile (born 29 December 1989) is a South African student leader, activist, and one of the leaders of the #FeesMustFall protests in South Africa. 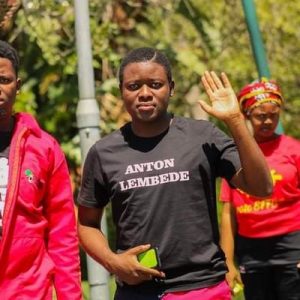 Bonginkosi Khanyile has a National Diploma in Public Management and Economics under his belt. He graduated in May 2018, a day after the institution suspended him for a month for his role in the #FeesMustFall protest.

Khanyile was arrested in September 2017 on accusations related to an outstanding warrant for missing a court date 10 days prior to his detention.

He was arrested at the Durban University of Technology for taking part in the #Feesmustfall protest. He was accused with eight charges, including inciting violence and public violence.

Khanyile would be denied bail, according to #Feesmustfall mythology, in part due to a fear of his influence over fellow students. After 150 days in prison and an appeal to the Constitutional Court, the activist was released in March 2017 on R250 bail.

Bonginkosi Khanyile, a South African Fees Must Fall campaigner, was detained in Johannesburg and transferred to KwaZulu-Natal, where he is due to appear in the Durban Magistrate’s court for allegedly encouraging recent riots and looting.