Delron Buckley (born 7 December 1977) is a South African retired professional footballer whose preferred position was left-wing and he could also play as a striker. 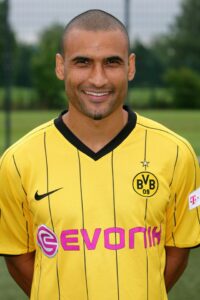 He was born on the 7th of December 1977 in Durban, South Africa. As of 2021, he is 44 years old and celebrates his birthday on December 7th every year.

Born in Durban, Buckley’s football career began with his local team Butcherfille Rovers Durban. At the age of 17, he was signed by German club VfL Bochum.

Buckley spent most of his career in Germany, going through Bochum’s youth teams and debuting in the Bundesliga in 1995. Buckley finally broke into the first squad in 1998 and remained a starter for much of his time at Bochum.

Having spent nine professional seasons with Bochum, Buckley left in 2004 for Arminia Bielefeld where he enjoyed his most successful season personally, scoring 15 goals and helping the team avoid relegation.

Buckley quickly picked up interest from higher-rated clubs. After only one season at Bielefeld, Buckley joined Borussia Dortmund for a reported transfer fee of €425,000 and signed a four-year contract.

Buckley’s first season at Borussia Dortmund was largely unsuccessful as he failed to score in 28 league matches. Widely regarded as bad signing, Buckley was loaned to Swiss club FC Basel 1893 for the 2006–07 season.

He played his team debut for Basel on 10 September 2006 as Basel won 2–1 at home against FC Zürich in the St. Jakob-Park. After returning in July 2007, Buckley was able to regain his place in the Borussia squad for the 2007–08 season but fell out of favour after the arrival of new manager Jürgen Klopp.[2]

In February 2009, he signed for 1. FSV Mainz 05 for the remainder of the season and was released on 30 June 2009. He moved then to Cyprian club Anorthosis Famagusta FC where he played until the end of 2010–11 season.

In January 2011, he transferred to German 2. Bundesliga team Karlsruher SC.

On 26 June 2012, he signed for Maritzburg United, playing for the first time in his career in South Africa.

Buckley made his international debut in a friendly against Zambia on 20 May 1998. He played 73 games and scored 10 goals for the South African national team. Buckley represented his country at the 1998 FIFA World Cup, 2002 FIFA World Cup and the 2004 African Nations Cup.