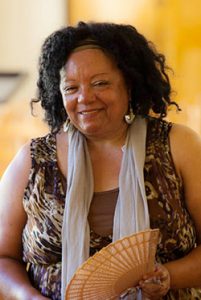 She was born on the 29th of August 1953 in Worcester, Western Cape, South Africa. As of 2021, she is 68 years old and celebrates her birthday on August 29th every year.

While working as an administrator at the University of the Western Cape, Ferrus runs writing workshops in Cape Town. Ferrus is best known for her poem about Sarah Baartman, a South African woman who was smuggled into Europe and paraded as a curiosity.

The poem was written in 1998 when she was a student at Utrecht University. The success of this poem is generally credited with bringing Bartmann’s remains back to South Africa.

The poem was made into a statute in France. Ferrus is a founding member of the Afrikaans Skrywersvereniging (ASV), Bush Poets, and Women in Xchains organizations.

Diana Ferrus Publishers is her publishing house, and she has co-edited and written a book of father-daughter stories.

She has an estimated net worth of $100,000 which she has earned as a writer, poet, and storyteller.