Eddie Ndopu (born 1990 in Namibia) whose full name is Edward Ndopu is a South African activist, humanitarian, and public intellectual. 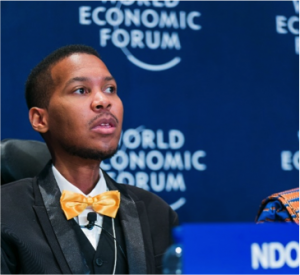 He was born in Namibia in the year 1990, after his single mother had fled apartheid South Africa by going into self-imposed exile.

Ndopu, a queer and feminist, was the first African student with a degenerative disability to be admitted to the University of Oxford on a full scholarship at the Blavatnik School of Government between 2016 and 2017. He graduated with a masters in public policy from Somerville College.

Eddie Ndopu formerly worked at Amnesty International as the Head of the Adolescents Engagement and Mobilization Program for Africa, where he worked with young activists to encourage politicians around the world to enhance educational options for disabled youth.

In 2009, he launched the Global Strategy for Inclusive Education, a movement to help children with disabilities in poor countries use their educational rights.

Ndopu became a Global Ambassador for Humanity & Inclusion in 2018, advocating for the rights of children with disabilities in underdeveloped countries.

Ndopu was named one of 17 notable supporters for the Sustainable Development Goals (SDGs) in 2019.

He has an estimated net worth of $500,000 which he has earned as an activist, humanitarian, and public intellectual.