He was born on 4th April 1939 in Witbank, South Africa and started singing and playing the piano at the young age of 14. 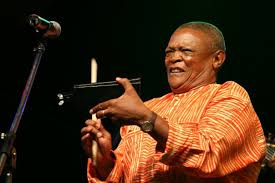 The popular entertainer died on the early morning of 23 January 2018 from prostate cancer at the age of 78 in Johannesburg.

For what would have been his 80th birthday, Google Doodle is honouring Hugh Masekela, the trumpeter and bandleader fondly remembered as the father of South African jazz.

Masekela, who died on Jan. 23, 2018 after a battle with prostate cancer, was more than a musician. He was also a leading activist during his country’s rule under the repressive apartheid government.

He ended up in exile for 31 years and did not return home until the release of Nelson Mandela from prison in 1990. But during his exile, he kept playing and raising awareness about the conditions in his country and around the world.

Born on April 4, 1939, Masekela first picked up a trumpet after seeing the film Young Man With a Horn and encouraged by activist Father Trevor Huddleston.

Often described as the “father of South African jazz,” Masekela was an icon of South Africa’s Sophiatown, the political and cultural enclave of Johannesburg that was razed by apartheid police but remains a symbol of black freedom.