Unathi Guma (born in King Williams town) is a South African actress known for her starring role as Dora, a former alcoholic with a problematic spending impulse, on the Mzansi Magic drama series Abomama. 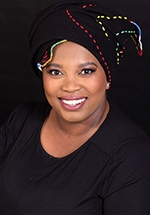 It was her first credited cinematic role, and it premiered on April 8, 2018.

She then had a guest-starring role in Season 1 Episode 5 of the 1Magic drama series Housekeepers (which aired on 3 November 2018).

Since then, Unati has been in a number of TV shows, including The Queen, Scandal!, Impilo: The Scam, and Rhythm City.