Jo-Anne Reyneke (born 2 June 1988) is a South African actress known for her roles as Pearl on SABC 2’s Muvhango and as Prudence Oliphant on e.tv’s Rhythm City. 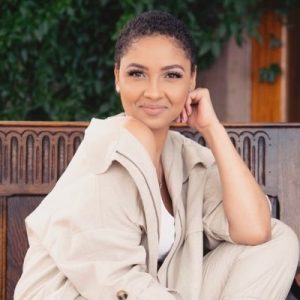 She was born on the 2nd of June 1988 in Vereeniging, Gauteng, South Africa. As of 2021, she is 33 years old and celebrates her birthday on June 2nd every year.

She studied drama and the performing arts at Russell High School (Pietermaritzburg), where she developed an interest in them. She went to Movietech Film and Television School in Durban after matriculating, where she studied acting and music.

Jo-Anne Reyneke married Thami Mngqolo, who played ‘Senzo Dlomo’ in the Generations series, in 2008. Uvolwethu, born in 2013, and Lungelo, born in 2015, are the couple’s two children. Reyneke and Mnqolo split in 2018 after ten years of marriage.

She began her career at The Playhouse Company in Durban, where she starred alongside Mary Twala, Lucia Mthiyane, and Sindi Dlathu in the Duma Ndlovu play The Game.

Jo-anne was offered a position on Muvhango as Pearl, a receptionist, because Duma Ndlovu wrote the play and was the originator and executive producer of Muvhango. It was her breakout role, and it helped her attain notoriety.

She departed Muvhango in 2013, appearing in Intersexions before moving on to Rhythm City later that year. She went on to star in television shows such as High Roller, Isidingo, and Scandal! She co-starred in BET’s comedy series “Black Tax” with Jason Goliath and Mamodibe Ramodibe in 2019.