Lucia Mthiyane (born 16 September 1975) is a South African jazz singer, actress, model, chef, and entrepreneur known for her role as Rachel Phakathi in the e.tv soapie Rhythm City, from 2007-2008. 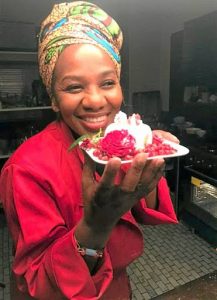 She was born on the 16th of September 1975 in Umlazi township outside Durban in Kwa-Zulu Natal, South Africa. As of 2021, she is 46 years old and celebrates her birthday on September 16th every year.

Lucia has worked as a performer in musicals, theater shows, and television programs, as well as doing TV hosting and corporate work. In 1998, she appeared in Richard Loring’s production of Girl Talk and at the Civic Theatre in Janice Honeyman’s Little Shop of Horrors.

She was nominated for a Tony Award for her role in Colin Law’s production of Blues Brothers in 1997.

Soul Buddyz, Backstage, Mzansi, Generations, and Flat 27 are some of the television shows in which she has appeared. She was nominated for an FNB Vita Award for Most Outstanding Performance in Musical Theatre in Kippie in 1998.