Duma Ndlovu (born 12 October 1954) is a South African poet, filmmaker, producer, journalist and playwright. He is well known in the South African television industry, having created award-winning shows such as Muvhango, Imbewu: The Seed and Uzalo. 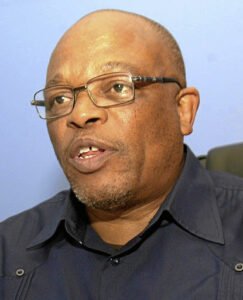 Duma Ndlovu is of Zulu ancestry, and he was born in Soweto, Gauteng; his ancestral home, however, is in Bergville, KwaZulu-Natal. He went to Sekano Ntoane High School in Senaoane.

After finishing high school he started writing for The World newspaper. He then founded the Medupe Writers Association, a group that encouraged young black people to take interest in being writers.

He served as the organization’s president until 1977 when the apartheid government banned the group due to its participation in black consciousness and anti-apartheid movements.

In 1985, Ndlovu founded the Woza Afrika Foundation in order to give young black aspiring actors and actresses the opportunity to pursue their dreams and also raise funds to support the overall Arts in South Africa. He also taught African-American literature and music at the State University of New York at Stony Brook.

In 1992 Duma Ndlovu returned to South Africa, and he founded the Word Of Mouth Productions to mount music, theatre and television productions.

The company was successful and a few years later it was chosen as the official casting company in South Africa for the Musical Broadway Disney’s The Lion King.