Makhosazana Ndlovu is a South African actress known for her starring role as Judith on the SABC1 comedy-drama series Makoti. 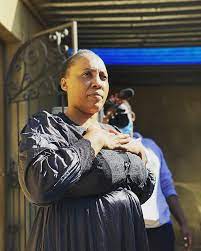 She has appeared in various more television programs like Room 9, eKasi: Our Stories, Abangani, Loxion Lyric, Soul City, and Umlilo.

She also had a starring role in the Original Mzansi Magic Movie Uguye Lo, which initially aired on the channel on 1 September 2016. Sipho Manzini also appeared in the film.