Samkelo Ndlovu (born 1989 in Alexandra Township) is a South African actress known for her role as Sonia on the SABC1 soccer drama series Zone 14. 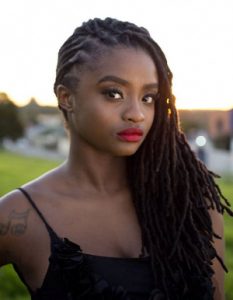 She was born in the year in Alexandra Township of Johannesburg, South Africa.

During her elementary education, Samkelo attended Fairways Primary School and later on, in her high school years, she completed her studies at Sandringham High School.

She went to the South African School of Motion Picture Medium and Live Performance, which is called AFDA.

Samkelo Ndlovu scored her first significant film job just a month out of college as Lerato in the soccer comedy film Taka Taka, in which Trevor Noah and Kagiso Lediga starred.

Seeking work on television, she successfully auditioned for several roles in plays such as “Zone 14,” “Intersexions,” and “Sokhulu & Partners,” as well as a supporting role in the SABC1 soap opera “Generations.”

She got the role of Esther in the 2011 feature film Skyf: The Movie, which was produced by Thapelo Moekoena.

She made her Rhythm City debut in July 2013 as Lerato, Fats’ vain and flirty cousin. In the television series Mzansi Love: Kasi Style, she appeared as a young lawyer who is working on a high profile divorce case with other colleagues at a large law office.