Kgaogelo Chauke (born 8 January 2003 in Pretoria) is a professional footballer who plays as a midfielder for Southampton. 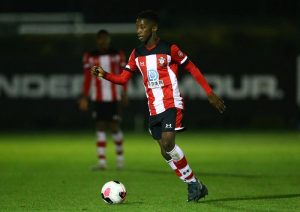 Chauke signed his first professional contract in January 2020 after joining Southampton from Thatcham Town in 2017. Chauke made his professional debut in Southampton’s FA Cup victory over Shrewsbury Town on January 19, 2021.

Chauke is of South African descent, and he is eligible to play for both England and South Africa on the international stage. In November 2020, he was named to the England U18 squad for a training camp. Chauke was named to a 78-man preliminary squad to represent South Africa at the 2020 Tokyo Olympic Games in February 2021. However, he was left out of the final 22-man squad.

He has an estimate net worth of $200,000 which he has earned as a footballer.