Kgaogelo Monama (born 11 May 1990) is is a South African actress, singer, and dancer best known for her starring role as Dee in the SABC1 sitcom Thandeka’s Diary. 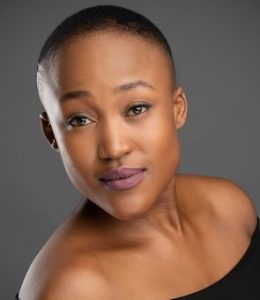 Tshwane University of Technology awarded her a B-Tech in Drama and Film Production. While there, she landed her first television role in the e.tv soap opera Scandal! as Sarafina, a young, talented, and outgoing waitress at Cole’s bar.

In the same year, she appeared in the first episode of Soul City 12 as a guest star. She landed a part on Thandeka’s Diary, a sitcom that follows the (mis)adventures of 16-year-old Thandeka Zulu, the following year, she guest starred in the e.tv action drama series Z’bondiwe.

Tselane and the Giant, Malibongwe Igama Lamakhosikaz, Exile, In Our Blood, Have You Seen Zandile?, She Bellows, and Sophiatown are among the theatre productions.

She is a talented cabaret dancer with an alto voice range who has appeared at Morula Sun and Meropa Casino, as well as a dancer in the group Diva Strides.

She joined the SABC2 daytime talk show Talk SA in 2016 as a co-presenter for the show’s seventh season.

She has an estimated net worth of $100,000 which she has earned as an actress, singer, and dancer.