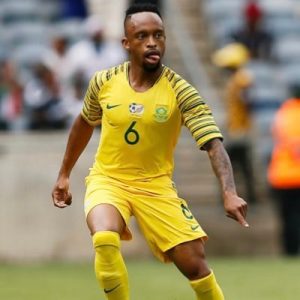 He was born on the 9th of November 1994 in Johannesburg, South Africa. As of 2021, he is 27 years old and celebrates his birthday on November 9th every year.

Phiri joined Brøndby IF’s under-19 team on a long-term loan from Bidvest Wits’ youth academy on February 8, 2013, for an eighteen-month period.

On 31 July 2014, Phiri made his Europa League debut in the starting line-up in a 3–0 away defeat against Belgian side Club Brugge.

He made his international debut for the South African National team coming off the bench during the second half in the Bafana’s 3–1 victory over Swaziland on 25 March 2015.

On 30 May 2017, Ligue 1 side EA Guingamp announced that Phiri had penned a four-year contract tying him to the club until summer 2021.

He has an estimated net worth of $250,000 which he has earned as a professional footballer.