Lungelo Mpangase (born 26 September 1995) is a South African actress and influencer known for her role as Khethiwe in the Mzansi Magic drama series eHostela. 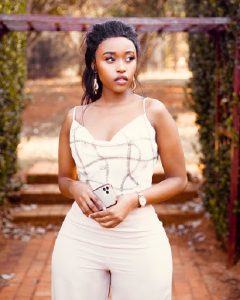 She was born on the 26th of September 1995 in Ladysmith, South Africa. As of 2021, she is 26 years old and celebrates her birthday on September 26th every year.

In the Mzansi Magic drama series eHostela, she played Khethiwe, a young woman who hopes to be a maskandi star.

The drama began on January 6, 2019, and it was her first series starring role. In the first season, her character was killed off.

She then starred in Themba Lam, a Mzansi Original Film about a young guy who pays for his lover’s studies after getting a high-paying commercial, only to have the tables turned on him.

She won another starring role in the Mzansi Magic drama series Mzali Wam in 2020, this time as Ntokozo, a girl who becomes caught in a sophisticated human trafficking operation involving her biological mother.