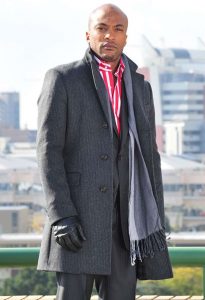 He was born on the 16th of November in Johannesburg, South Africa but he grew up in Lesotho and celebrates his birthday on November 16th every year.

He is married to Machere Pooe, who is considered one of South Africa’s best fashion designers and is the owner of the Machere Fashion house.

The Toasty Film, CineMagic, Mamepe, Standard Bank Joy of Jazz, and Gaz’lam are just a few of the shows he’s directed. From 2003 to 2005, he played Vic in Gaz’lam, and he was a key member of the cast and development teams of Shaka Zulu, Uzalo, and Ehostela.

In 2006, he took over as host of SABC 2’s reality show You’re Hired 2 from Bob Mabena. He was named Cosmopolitan’s Sexiest South African Man in the same year, and he was also named one of the 5 Seventeen Magazine Hotties.

He’s been hired as the emcee for beauty pageants, music festivals, and corporate events. He is a brand ambassador for Cellfood, a non-profit that promotes a healthy diet and way of life.

He has an estimated net worth of $300,000 which he has earned as an actor, television presenter, director, and businessman.