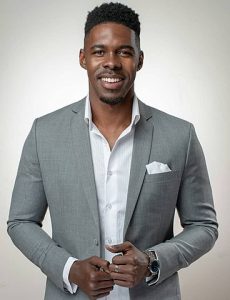 From Grade 1 to 10, he attended Noordgrens Primary-Secondary School in Rundu, where he was the Head Boy. In 2008, he relocated to Windhoek, where he completed Grades 11-12 at Academia High School, where he was once again named Deputy Head Boy.

Munana was a first-year student at Namibia’s Polytechnic in 2010. He came to Cape Town, South Africa, in 2011 to study at UCT, then the following year transferred to C.P.U.T, where he earned a degree in Financial Analyst.

Munana began his modeling career in South Africa while still pursuing his Finance degree. He did World Fashion Week, Mercedes Benz Fashion Week in Cape Town and Johannesburg as a runaway model.

He has also done ads for PEPSI, Etisalat, TN1 Boxes, and MiFone, to name a few. He has worked as a television host for Yo Music Countdown (Namibia) and Voigush Africa (co-founder and presenter). He’s also a Red Carpet Host for MTV Base All Africa Awards and Metro Fm Awards under the Voiguish Africa banner.

He has an estimated net worth of $400,000 which he has earned as a television personality and entrepreneur.