Hage Geingob (born 3 August 1941) is the third and current president of Namibia and he has been in office since 21 March 2015. 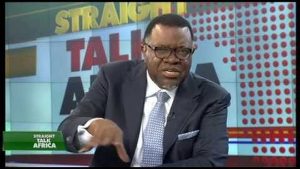 Hage Geingob was born on the 3rd of August 1941 in in Otjiwarongo, South West Africa (present day Namibia). As of 2021, he is 80 years and celebrates his birthday on August 3rd every year.

He acquired his early schooling in the Bantu Education System in Otavi, South West Africa.

Hage Geingob married New York City native Priscilla Charlene Cash in 1967, and the pair produced one daughter, Nangula Geingos-Dukes. On September 11, 1993, in Windhoek, Geingob married Loini Kandume, a businesswoman, in a high-profile marriage that produced two children: a daughter and a boy.

In May 2006, Geingob filed for divorce from Kandume, and in July 2008, he was granted a temporary divorce order. On February 14, 2015, Geingob married Monica Geingos. In Windhoek, the Hage Geingob Rugby Stadium is named after him.

He was elected by SWAPO’s Politburo to lead the party’s election campaign in Namibia in 1989. To complete this mission, he returned to Namibia with many of his colleagues on June 18, 1989, after a 27-year hiatus.

He has an estimated net worth of $150 million which he has earned as a politician.