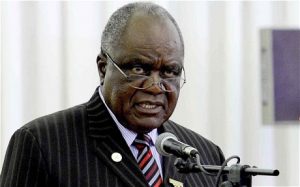 In 1983 he married Penehupifo Pohamba, and they had three children, Tulongeni (born 1986), Kaupumhote (born 1988) and Ndapanda (born 1991), who was born shortly after independence.

In 1997, he was elected secretary-general of SWAPO, and in 2002, he was elected vice-president. In addition to his previous ministerial positions, he was appointed Minister of Lands, Resettlement, and Rehabilitation on January 26, 2000, a role he held until becoming President in 2005.

At an extraordinary party meeting in May 2004, Pohamba was chosen as SWAPO’s presidential candidate for the 2004 election.

Pohamba was elected as SWAPO President during a party convention on November 29, 2007; he was the only candidate nominated, thus no voting was required. “I am passing the torch and mantle of leadership to comrade Pohamba,” Nujoma stated. Pohamba was also chosen as the party’s sole presidential candidate for the 2009 election by the congress.

He has an estimated net worth of $10 million which he has earned as a politician.