He served as the Provincial Secretary of the African National Congress North West Provincial Leadership from 2011 till August 2018. 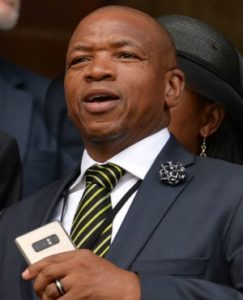 He was born on the 7th of June 1964 in Manamolelo outside Delareyville to Steve Mahumapelo and Agnes Bereng. As of 2021, he is 57 years old.

He is married to Kule Mahumapelo. She owns a foundation that is working in partnership with the South African Social Security Agency and other stakeholders.

The primary objective of the foundation was to help orphans but it later integrated the elderly people.

In 1996, he got married to Christinah Kgari. Together they have four children, two boys, and two girls.

Supra also became a grandfather of recent when his first child was blessed with a son. He resides with his family in Mafikeng.

His parents are late. His father Steve Mahumapelo passed on in 1997 while his mother Agnes Bereng passed on in 2008.

He has an estimated net worth of $5 million to $10 million which he has earned from his successful political career.