Mbuyiseni Ndlozi (born 9 May 1985) whose full name is Mbuyiseni Quintin Ndlozi is a South African politician and member of the EFF in the Parliament of South Africa.

He was born in Gauteng and was the previous national spokesperson of the Economic Freedom Fighters. 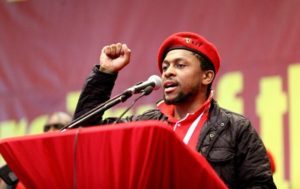 He was born on the 9th of May 1985 in Gauteng, South Africa. Mbuyiseni Ndlozi is 37 years old as of 2022 and celebrates his birthday on May 9th every year.

Ndlozi is married to Mmabatho Montsho who is a South African actress, filmmaker and fashion designer.

He has an estimated net worth of $1 million to $5 million which he has earned from his involvement in politics.