Musa Mthombeni (born 22 April 1989) is a South Africa television presenter and actor known for presenting a number of YOTV shows. 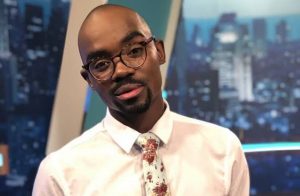 He is in a romantic relationship with Jacaranda FM presenter and former Miss SA Liesl Laurie. The pair are one step closer to walking down the aisle as Musa paid lobola for his wife.

He began his radio career in 2010 with Voice of Wits FM and afterward served as an on-air host for YFM from 2012 to 2014. In addition, he is a licensed physician.

Musa made his acting debut in the 2012 episode “Boy Next Door” (Season 1, Episode 8) of the e.tv drama anthology series eKasi: Our Stories. In 2013, he also appeared in the second season of the SABC1 drama series Intersexions as a supporting character.

In 2014, he starred in the candid camera comedy film Ek Joke Net 2 as a prankster.

Musa joined the four-person panel on the SABC3 chat show Trending SA in November 2017, replacing Shaka Sisulu, who had departed the show in July of that year.

He has an estimated net worth of $400,000 which he has earned as a TV Personality.